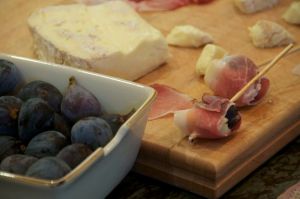 Is there anything more wonderful than a night at the Hollywood Bowl?  Last night we joined several friends for an evening under the stars to hear The Brian Setzer Orchestra.  Although I’m a big fan of Brian’s, I was most excited to see Leslie Spencer making her debut at the Bowl.  Go Les!

You never can be sure if there will be an opening at a picnic table, so we decided upon a simple tapas dinner.  My colleague Sonya had generously shared with me a bowl of figs from her tree, and I found an idea for them on one of my favorite food blogs, A Feast for the Eyes.  I wrapped each fig with a slice of proscuitto, with a dab of brie cheese tucked inside, then placed them on a skewer.  I finished them by placing on the grill for a short time, so the cheese would soften a bit.  Delicious and so very easy!  Thanks, foodiewife, for a great idea. 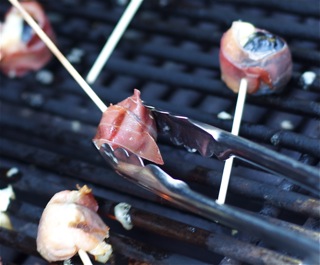 Having spent half the day meeting with a new client and at a property inspection, I didn’t have a whole lot of time for food prep before hopping on the shuttle for the Bowl, so I decided to keep it simple and made goat cheese crostinis.  I thinly sliced a baguette, drizzled each piece with olive oil, and toasted the crostinis in the oven.  Fortunately I had a few toppings on hand from recent canning experiments, including: tomato basil marmalade, pickled fennel with orange zest (both from Thomas Keller’s Ad Hoc cookbook), and rosemary onion confit (The Pickled Pantry by Andrea Chesman).

1 thought on “A Night at the Bowl”